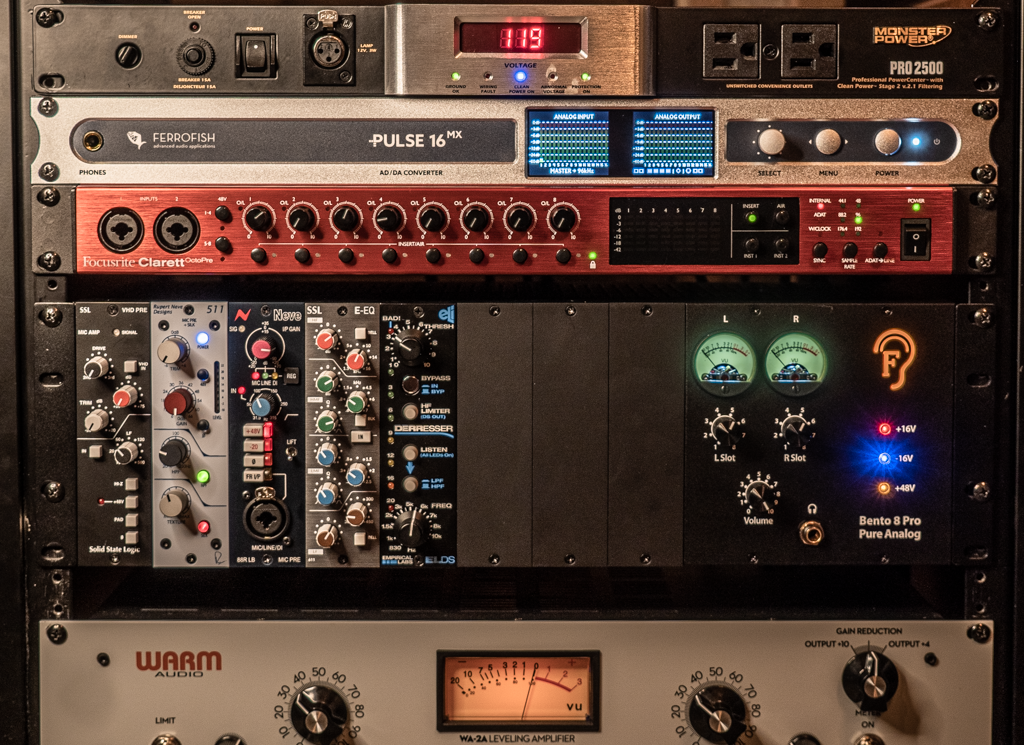 It’s been a few weeks since my last update, and just like anytime you haven’t seen a kid for a while, it seems like they grew a a foot or too. I like to think that’s the case here too. In the last couple of weeks there have been a number of additions and improvements.

First, storage, the digital kind. 16TB of RAID has been added to the workstation. That should be enough to keep the sessions rolling without a hiccup for some time. In addition to be a lot of storage, it’s whisper quiet too. Can’t beat that.

Secondly, two new 500 Series analog hardware pieces of gear have arrived and already been put into production. A SSL E-EQ. This EQ is ICONIC, as proven by the number of plugin emulations out there. For those who don’t know, The E series EQ, which was found on the SSL E Series Consoles of the 70’s has been used on thousands of albums throughout the years on hit and platinum records. Now that same hardware can be found at Revolv.

In addition to the SSL E-EQ, an Empirical Labs DerrEsser, De-Esser has been added to production. What makes this piece of gear so cool is that in addition to be a world-class de-esser, it also has the ability to smooth out high frequencies, via analog saturation adding a sweet smooth sound to voicel tracks that can only be done by transformers.

Moving on from the 500 Series gear in the racks, their has also been an addition of a Focusrite OctoPre, which provides 8 channels of crystal clear and transparent Pre-Amps. The Pre amps, can either be routed for full analog operation or converted to digital signal in the unit using on board A/D converters and then sent via ADAT into Pro Tools. All eight channels also feature Focusrite’s Air, which creates that magical open top end, to create space, without adding harshness.

And Finally, the glue that makes all of the analog outboard gear head into Pro Tools, a Pulse 16mx AD/DA converter. This bad boy gives me 16 channels of world class AD conversion via Cirrus Logic with rates up to 24 bit / 192 kHz. In addition to the conversation, the Pulse 16mx also features proprietary anti-jitter circuitry in the Master Clock, the ensures the most accurate time that is top notch. If I elect to run the OctoPre as a AD Converter, in tandem with the Pulse 16mx, that gives me a total of 34 channels of hardware/outboard I/O capability – not too shabby! The Ferrofish Pulse 16mx also provides MADI capability for future growth.

So, needless to say, it’s been quite a growth spurt here! Hope everyone is starting Summer off with a bang and staying safe!