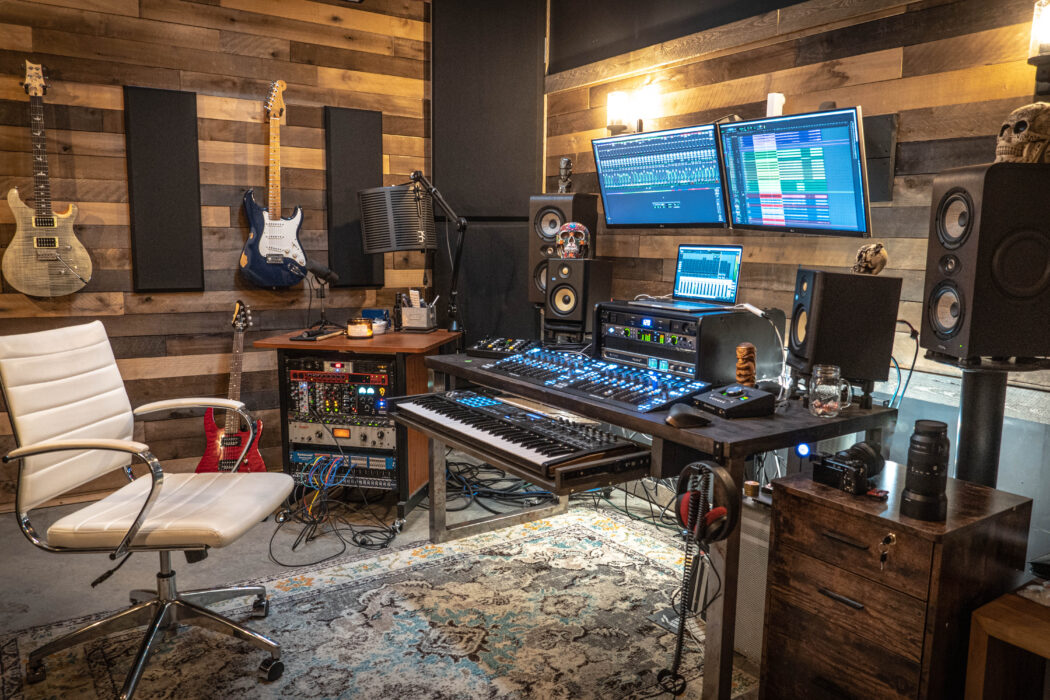 Wow, where to begin posting. this update. First, I hope everyone one had a fantastic Thanksgiving, and you have a happy and merry holiday season! Secondly, let me apologize for the lack of monthly updates for the last couple of months. There is a lot to update on!

True to the studio’s name, it seems like I am in a constant “re-evolving” state. Over the last couple of months, I’ve added the final components to the acoustical design, and working on the overall aesthetic appearance. The light is finally being seen at the end of the tunnel, for now. In addition to the full :whisper wall construction, and custom built treatment, the studio has been supplemented with treatment from Prime Acoustics. This addition creates a perfectly controlled environment from production to delivery ensuring balanced consistent results.

An update wouldn’t be complete unless there wasn’t some new gear ro talk about! on the outboard gear, there are three notable additions!

First. Shortly after the addition of the x8 and Switchcraft patching burst; a workflow upgrade was added! I’m ecstatic to say that not one, but two SSL UF8 control surfaces have been added! The addition of the UF8s, gives ReVolv a state of the. art mixing and control surface. By adding two of them, it gives the studio 16 faders to increase the speed of work, automation, full recall, as well as, support the creative process and the little details while mixing that make a huge difference!

Secondly, classic Trident sound! That’s right, the sound of countless classic recordings that were completed on the Trident 80 series consoles, is now a reality at Revolv. Two 80 series EQ’s have been added and they sound phenomenal on anything, but sound really good on drums and guitar. These EQs are the same design and construction that were found in those Trident 80 series consoles, it’s like they were pulled right out of the console and placed in the rack.

Third, another iconic sound was added, the sound of DBX 160 compression. It’s a bread and butter sound that has been used on probably every record somewhere, if not in hard ware form, plugin. Now, we have actual hardware units to create that well known sound, on drums.

Lastly, another guitar has been added to the house rotation, and it’s also a classic. This one is good, a Fender American 60’s re-issue Telecaster. It sounds and plays amazing. This particular guitar has the “Texas Special”, pickups on board. What’s that mean? Well, it’s a little hotter, and has the ability to drive the front end of amps a little harder and create that magical sound, while not losing the ability to back off a little for warmth. A true Icon.

In addition to the physical additions, there has been addition of software as well. I’m happy to announce that in addition to Pro Tools, and Logic, and the recent addition of the Universal Audio x8I have finally started the dive into Luna from Universal Audio. It’s a feature robust DAW that takes advantage of Universal Audio’s Hardware/DSP, their plugins, and really does create a studio environment that provides unique benefits.

Additional plugins from Dept of Sound have also recently been added. Of course, new plugins from companies all ready in house from Universal Audio, Slate Digital, Waves, and SSL have also been added as they have become available.

Well, looking back into this post, I think I have covered everything, but inevitably I’m sure I’ve missed something(s). Always be sure to check out the current “Studio Equipment List”, and “Plugin List” as the absolute list. I do keep these accurate and updated quite frequently.

This is a demo store for testing purposes — no orders shall be fulfilled. Dismiss